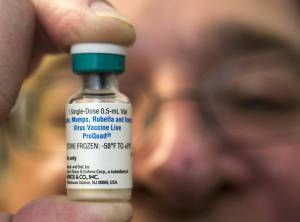 A subplot to the vociferous debate over the student vaccination bill moving through California’s Capitol is opponents’ allegations that the effort reflects the influence of the pharmaceutical industry.

Critics of Senate Bill 277, which would eliminate the personal belief and religious exemptions for schoolchildren, accuse the measure’s supporters in the Legislature of doing the bidding of donors who make vaccines and other pharmaceuticals.

The bill’s proponents and drug companies dismiss the charge. The companies’ lobbyist filings for the first quarter of this year as well as legislative committee reports show no connection between the pharmaceutical industry and SB 277.

“We aren’t pushing this bill behind the scenes,” said Priscilla VanderVeer, the senior director for communications for the Pharmaceutical Research and Manufacturers of America, known as PhRMA, the industry’s main trade group. The group has no taken no position on SB 277, although the group has long backed vaccinations as sound public health policy, she said.

Other legislation has a more direct bearing on the industry, and it is an active political player. Pharmaceutical companies and their trade groups gave more than $2 million to current members of the Legislature in 2013-2014, about 2 percent of the total raised, records show. Nine of the top 20 recipients are either legislative leaders or serve on either the Assembly or Senate health committees. Receiving more than $95,000, the top recipient of industry campaign cash is Sen. Richard Pan, a Sacramento Democrat and doctor who is carrying the vaccine bill.

In addition, the industry donated more than $500,000 to outside campaign spending groups that helped elect some current members last year.

Leading pharmaceutical companies also spent nearly $3 million more during the 2013-2014 legislative session lobbying the Legislature, the governor, the state pharmacists’ board and other agencies, according to state filings.

*Member of the Assembly or Senate health committees